This article was originally published on The Solana Cookbook.

On some occasions, a seemingly valid transaction may be dropped before it is included in a block. This most often occurs during periods of network congestion, when an RPC node fails to rebroadcast the transaction to the leader. To an end-user, it may appear as if their transaction disappears entirely. While RPC nodes are equipped with a generic rebroadcasting algorithm, application developers are also capable of developing their own custom rebroadcasting logic.

The Journey of a Transaction

In Solana, there is no concept of a mempool. All transactions, whether they are initiated programmatically or by an end-user, are efficiently routed to leaders so that they can be processed into a block. There are two main ways in which a transaction can be sent to leaders:

The vast majority of end-users will submit transactions via an RPC server. When a client submits a transaction, the receiving RPC node will in turn attempt to broadcast the transaction to both the current and next leaders. Until the transaction is processed by a leader, there is no record of the transaction outside of what the client and the relaying RPC nodes are aware of. In the case of a TPU client, rebroadcast and leader forwarding is handled entirely by the client software. 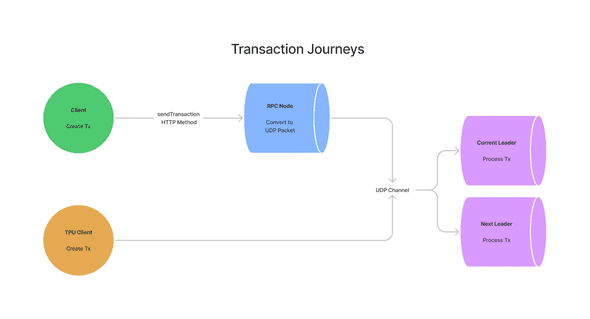 After an RPC node receives a transaction via sendTransaction, it will convert the transaction into a UDP packet before forwarding it to the relevant leaders. UDP allows validators to quickly communicate with one another, but does not provide any guarantees regarding transaction delivery.

Because Solana’s leader schedule is known in advance of every epoch (~2 days), an RPC node will broadcast its transaction directly to the current and next leaders. This is in contrast to other gossip protocols such as Ethereum that propagate transactions randomly and broadly across the entire network. By default, RPC nodes will try to forward transactions to leaders every two seconds until either the transaction is finalized or the transaction’s blockhash expires (150 blocks or ~1 minute 19 seconds as of the time of this writing). If the outstanding rebroadcast queue size is greater than 10,000 transactions, newly submitted transactions are dropped. There are command-line arguments that RPC operators can adjust to change the default behavior of this retry logic.

When an RPC node broadcasts a transaction, it will attempt to forward the transaction to a leader’s Transaction Processing Unit (TPU). The TPU processes transactions in five distinct phases: 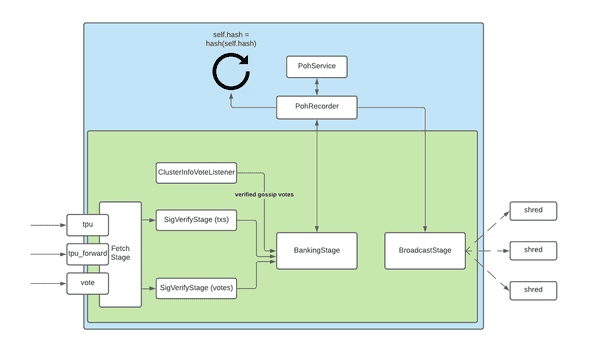 For more information on the TPU, please refer to this excellent writeup by Jito Labs.

How Transactions Get Dropped

Throughout a transaction’s journey, there are a few scenarios in which the transaction can be unintentionally dropped from the network.

Before a transaction is processed

If the network drops a transaction, it will most likely do so before the transaction is processed by a leader. UDP packet loss is the simplest reason why this might occur. During times of intense network load, it’s also possible for validators to become overwhelmed by the sheer number of transactions required for processing. While validators are equipped to forward surplus transactions via tpu_forwards, there is a limit to the amount of data that can be forwarded. Furthermore, each forward is limited to a single hop between validators. That is, transactions received on the tpu_forwards port are not forwarded on to other validators. 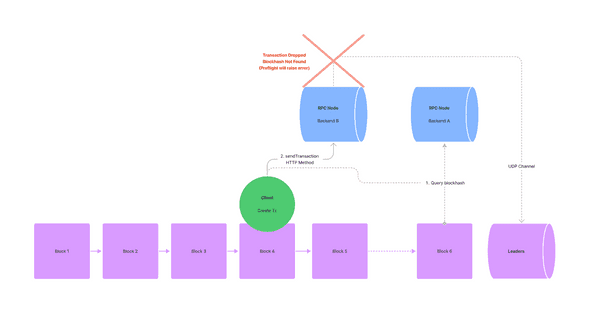 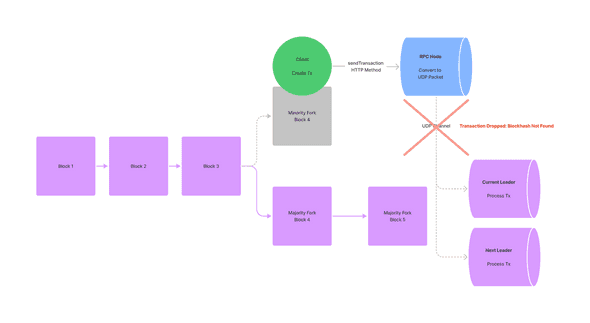 After a transaction is processed and before it is finalized 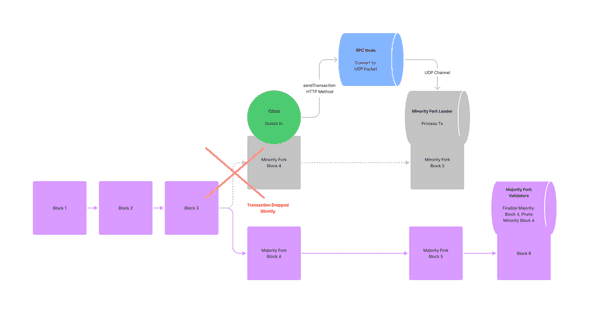 While RPC nodes will attempt to rebroadcast transactions, the algorithm they employ is generic and often ill-suited for the needs of specific applications. To prepare for times of network congestion, application developers should customize their own rebroadcasting logic.

An In-Depth Look at sendTransaction

In order to develop their own rebroadcasting logic, developers should take advantage of sendTransaction’s maxRetries parameter. If provided, maxRetries will override an RPC node’s default retry logic, allowing developers to manually control the retry process within reasonable bounds.

A common pattern for manually retrying transactions involves temporarily storing the lastValidBlockHeight that comes from getLatestBlockhash. Once stashed, an application can then poll the cluster’s blockheight and manually retry the transaction at an appropriate interval. In times of network congestion, it’s advantageous to set maxRetries to 0 and manually rebroadcast via a custom algorithm. While some applications may employ an exponential backoff algorithm, others such as Mango opt to continuously resubmit transactions at a constant interval until some timeout has occurred.

When polling via getLatestBlockhash, applications should specify their intended commitment level. By setting its commitment to confirmed (voted on) or finalized (~30 blocks after confirmed), an application can avoid polling a blockhash from a minority fork.

If an application has access to RPC nodes behind a load balancer, it can also choose to divide its workload amongst specific nodes. RPC nodes that serve data-intensive requests such as getProgramAccounts may be prone to falling behind and can be ill-suited for also forwarding transactions. For applications that handle time-sensitive transactions, it may be prudent to have dedicated nodes that only handle sendTransaction.

The Cost of Skipping Preflight

In the event that any of these three preflight checks fail, sendTransaction will raise an error prior to submitting the transaction. Preflight checks can often be the difference between losing a transaction and allowing a client to gracefully handle an error. To ensure that these common errors are accounted for, it is recommended that developers keep skipPreflight set to false.

When to Re-Sign Transactions

Despite all attempts to rebroadcast, there may be times in which a client is required to re-sign a transaction. Before re-signing any transaction, it is very important to ensure that the initial transaction’s blockhash has expired. If the initial blockhash is still valid, it is possible for both transactions to be accepted by the network. To an end-user, this would appear as if they unintentionally sent the same transaction twice.

In Solana, a dropped transaction can be safely discarded once the blockhash it references is older than the lastValidBlock received from getRecentBlockhash. Developers can conveniently check this for a given blockhash via isBlockhashValid. Once a blockhash is invalidated, clients may re-sign with a newly-queried blockhash.

Many thanks to Trent Nelson, Jacob Creech, White Tiger, Le Yafo, Buffalu, and Jito Labs for their review and feedback.